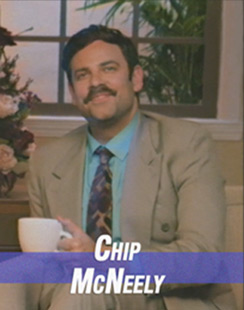 An institution unto himself, Chip McNeely has been a mainstay of people’s mornings across the southwestern United States since 1984. Born and raised in the idyllic town of Hanford, California, Chip made his way to the big city of Bakersfield to attend California State University in Bakersfield where he was a star athlete in the school’s basketball, lacrosse, and “ultimate” Frisbee quad athletic clubs. Despite multiple offers and opportunities to go pro as a Frisbee athlete, Chip sought a path of public service and decided the best way to serve the public was to become a journalist.

Starting as a production assistant at Channel 13 K-FED news in Bakersfield, Chip quickly became a favorite of many around the station and before long he was getting sent out on assignment covering rodeos across the Central Valley. Chip’s emotional interview with bucking bronco rider Ruddy “Mudd” Ruckson following the death of “Limpy” the Rodeo Clown cemented Chip’s place in the hearts of viewers across Kern County. He was promoted to lead anchor on K-FED’s morning news three weeks later.

In 1986, after two years of meteoric success as a beloved figure across the state, K-FED station chief Ram Carter came to Chip with a vision for a regionally syndicated morning show that would reach fans from Salinas to Santa Fe. He paired Chip up with trusted news producer Neil Lancaster and that summer Rise & Wake Up! hit airwaves across four states, thirteen military bases, and seven national parks.

The carousel of co-anchors finally came to an end when Chip was paired up with a whip-smart bundle of energy named Marianne Star. Since 1991, Chip and Marianne have greeted over 800,000 households every morning with their unmistakable banter and free-wheeling interviewing style.